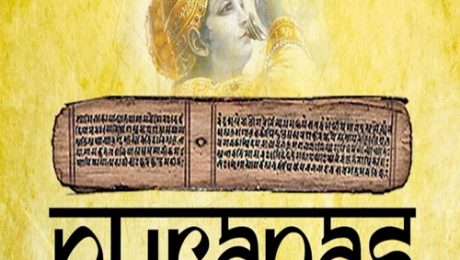 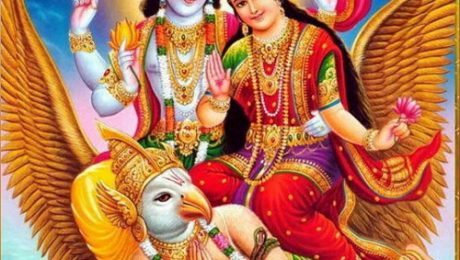 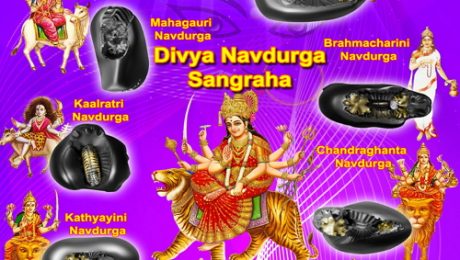 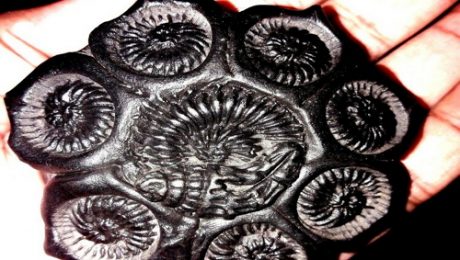 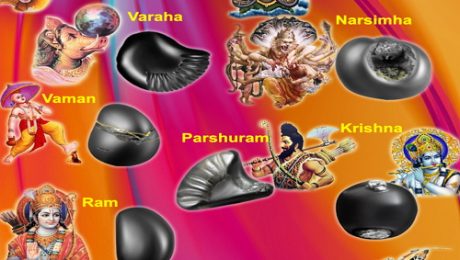 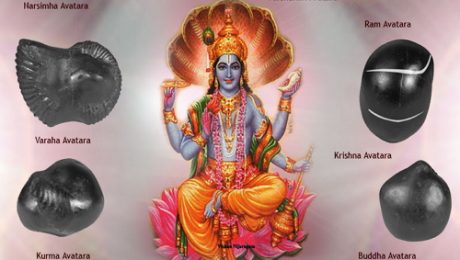 The study of fossils is divided into number of broad areas of expertise , saligrams are classified as ammonite fossils in palaeontology. Saligramas are sacred stones which represent the abstract form of lord vishnu . The marks made by the shell of the ammonite give a shaligrama its characteristic appearance with the pattern often resembling and representing the sudarshana chakra which rests on the index finger of lord vishnu . According to shastras a small insect known as vjara kita cuts through this stone and lives inside this saligrama . Saligrama stone come in large number of sizes ranging from small less than the size of a a small marble to fair sized rock . The saligrama is a black ammonite stone found in nepal in the river gandaki a northern tributary of the ganges also known in antiquity as narayani , shalagram hiranvati , and hiranyavati It is a sort of fossilized shell , oval is shape with abrasions or tree like marking on it , smooth , shining , egg liked , may have a hole , be like a shell . It is considered sacred and is usually indentified with lord vishnu or lord krishna beacuse of its natural mystical marking it is categorized as svayambhu or self existent .The saligramas are of various colour and according to it the stones are variously named for example shubra vasudeva blue …..Hiranyangarbha , black vishnu , red pradhyumna , dark green srinarayan , dark blue narsimha or vaman the one having twelve chakra or wheels is regarded as anant there are 89 kinds of saligramas altogether .

Puranas have recorded many other characteristics to classify saligrama . Each of the prominent varieties mentioned above were again divided into new kinds in accordance with its color and other cahracteristics .We find the new divisions of saligram properly recorded in the skandapurana the benefit of worshiping these varieties are also described the glaced type bestows liberation , black bestows fame , brown removes sin , yellow bestows progeny , blue grants fortune according to the text yogaparijata worship offered to a broken or rough saligrama causes loss of wealth, intellect and longetivity and that to one which is either white in color or printed with teeth like marks brings good fortune . The skand puran reveals that saligram shilas can be indentified by different colors, shapes and markings . Yhe scriptures explains the positive and negative effects of worshipping various types of shaligram shilas . The agni puran further expands on the lsit of shaligram shilas which always give fortunate or unfortunate rewards . By looking at the different marking on shilas we can identify particular shila standard texts for the same are hari bhakti vilas citing brahma puran , padma puran , gautmiya tantra . Skandapurana mentions 24 types of saligrams keshava , madhusudana , sankashana , domaodara , vasudeva , pradyumna , vishnu , madhava , ananta , purushottama , adhokshaja , janardana , govinda , triikrama , shridhara , hrishikesha , nrisimha , vishvayoni , vamana , narayana , pundarikaksha , upendra , ahri , krishna . Praopanchasara tantra mentions 50 different forms each of which may be worshipped in a saligrama keshava , narayana , madhava , govinda , madhusudana , trivikrama , vamana , shridhara , hrishkesha , padmanabha , damodara , vasudeva , sankarshana , pradyumna , aniruddha , chakrin , gadin , sharngin , khadgin , halin , musalin , shoolin , passhin , anushin mukunda , nandaja , nandin , nara , narakajit , hari , krishna , satya , satvata , shauri , shuri , janardana , bhudharin , vishvamurti , vaikundtha , purushottama , balin , vrishagna , vrisha , hamsa , varaha , vimala , narasimha . In padampuran it is said that in whatever homes you find a saligram the home is better than places of pilgrimage , just by looking at a shaligramserious sins are absolved those you pray to it are specially blessed saligram is symbolic of the universal vishnu . In skandpuran shiva has narrated the importance of saligram every year in the hindu kartik on the twelfth day of the lunar month women conduct marriages between saligram and tulsi and offer new clothes and other items . Amongst hindus the marriage seson starts thereafter . In the brahvaivartpuran prakritikhand chapter 21 it is said that wherever one finds saligram vishnu reside there after completing several pilgrimages lakshmi also joins hin . All kinds of sns are absolved . Saligram has the ability to bless one with important positions , prosperity and prosperity . However one must avoid keeping defective and damaged saligram that are sharp , malformed yellow or discolored .Such saligram bring bad luck and create problems and must be discarded .