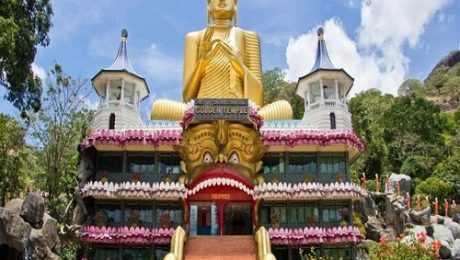 The golden cave temple or the royal rock temple complex has five separate caves that contain about 157 stunning buddha statues and mural paintings covering 2100 sq meters some of srilankas most important and evocative religious art . Created over 2,000 years ago they have been embellished over centuries by subsequent kings . The early paintings of dambulla are believed by some to belong to the 8th century AC . A sacred pilgrimage site of 22 centuries it is the largest best preserved cave temple in srilanka . The site is insulated and vast in size with its perpendicular height about six hundred feet . Few parts of the complex are covered with wood and the surface is largely bare and black . Dating back to the first century BC , this temple was designated a unesco world heritage site in 1991 . 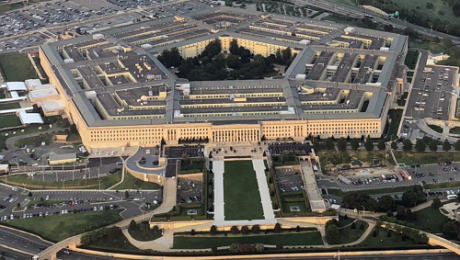 The pentagon the headquarters of the us dept of defence located just outside washington in arlington. Virginia is one of the world’s largest office buildings. The building was designed by americian architect george bergstrom and has five sides five floors above the ground two basements levels and five ring corridors per floor with a total of 17.5 mi ( 28.2 km ) of corridors . The central five acre ( 20,000 sqm ) pentagonal plaza is nicknamed ground zero on the presumption that it would be a prime target in a nuclear war . Completed in jan 1943 after 16 months of construction the complex has 19 escalators , 284 restrooms , 691 water fountains three times the floor space of the empire state building and houses about 26000 employees. In the buildings main concourse is the hall of heroes a room dedicated to people who have received the medal of honor the united states highest military decoration. The pentagon memorial also known as the 9 / 11 memorial located outside was built to remember the people who lost their lives in the attacks of 9 / 11 . 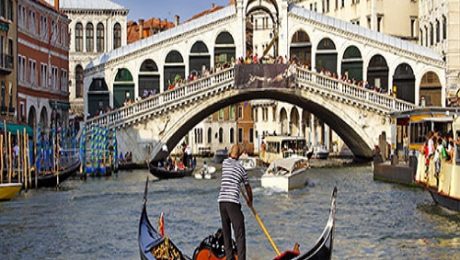 Venice spread over 118 islands and founded in the 5 century became a major maritime power in the 10th century. The whole city and its lagoon is an extraordinary architectural masterpiece in which even the smallest building contains work by some of the world’s great artists such as giorgione , titian , tintoretto , veronese etc . The most famous place in venice is piazza san marco , or st marks square the centre from which rises the homonymous , five domed st marks basilica . Bronze horses dominate its main entrance while the interior is covered in mosaics ( mostly in gold ) that recounts scenes from the bible.  Next to basilica is ducal palace which has the elaborate and lavish higher council hall . The bell tower in front was constructed in 1902 . Bridges here are distinctly different such as rialto bridge and bridge of sigh . The city of venice and its lagoon which covers 50, 000 sq km were designated a unesco world heritage site in 1987 . 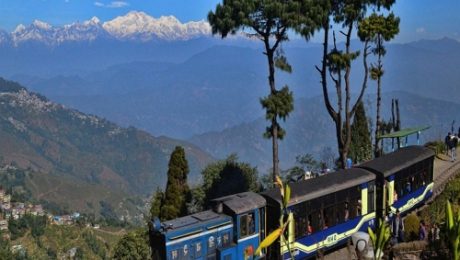 The darjeeling himalayan railway which is also known as a toy train runs between new jalpaiguri & darjeeling . Running on the narrow gauge it was built between 1879 & 1881 . The distance is around 78 kilometers with 13 stations enroute . The most interesting part is that it travels over the elevated terrain from 100 meters to 2,200 meters . The most outstanding example of a hill passenger railway.  It’s designed applies bold and ingenious engineering solutions in connecting beautiful mountainous terrain . This unesco world heritage site railways has a station named ghum which is the highest railway station in india.  All the three railways are fully operational till date . 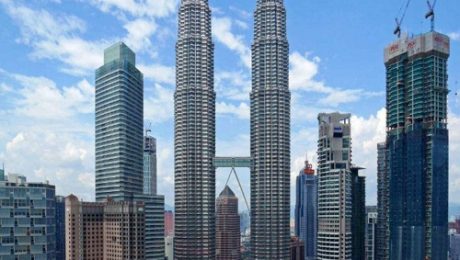 Petronas towers the world tallest twin towers located in kuala lumpur are 88 storey buildings designed by cesar pelli & associates that are joined at the 41 st and 42 nd floor ( 175 m above the street level ) by a 58 metre long double decker sky bridge . Standing 452 meters tall the architecture of these buildings was inspired by malaysian and Islamic culture and primarily house the corporate headquarters of petronas company and other offices.  After 6 years in construction the towers were completed in 1998 and consists of 89000 sq ft of laminated glass to reflect harmful UV rays . The petronas towers are placed on the world’s largest foundation that is 120 meters approx 400 ft and the sky bridge can move independently from the towers . The towers taper towards the antennas that are placed on top to stabilize the towers structurally.  A reflection and homage to the dominant islamic culture of malaysia these towers are a major landmark of kuala lumpur. 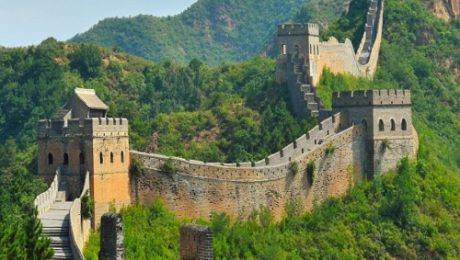 The great wall of china is a series of fortifications made of stone , brick , tamped earth , wood and other materials generally built along an east to west line across the historical northern borders of china to protect the chinese states and empires againist the raids and invasions of the various nomadic groups of the eurasian steppe . Apart from defense other purposes of the great wall have included border controls allowing the imposition of duties on good transported along the silk road regulation or encouragement of trade and the control of immigration and emigration. In 220 b.c . under emperor qin shi huang of china sections of earlier fortifications were joined together to form what we call the great wall today . Construction continued up to the ming dynasty ( 1368 – 1644 ) and the name great wall was actually given in 1877 . The great wall stretches from dandong in the east to lop lake in the west along the arc that roughly delineates the southern edge of inner mongolia.  The great wall is not only because of the ambitious character of the undertaking but also the perfection of its construction an absolute masterpiece. The only work built by human hands on this planet that can be seen from the moon the wall constitutes on the vast scale of a continent a perfect example of architecture integrated into the landscape.  About one forth of the length of the wall consists solely of natural barriers such as rivers and mountain ridges . Nearly all of the rest ( about 70 percent of the total length ) is actually constructed wall with the small remaining stretches constituting ditches or moats .There is a section of the great wall where it goes up extremely steep slopes in jinshanling and is one of the most striking section of the wall , though earth and stone are mostly the materials used to build the wall glutinous rice ( sticky rice ) was put on the mortar.  The amylopectin which makes this rice sticky can probably take credit for the endurance of the wall over the thousands of years.  While many portions near beijing have been renovated some parts of the wall have disappeared over the years . It was included under the new seven wonders of the world in 2007 and a unesco world heritage site in 1987 . 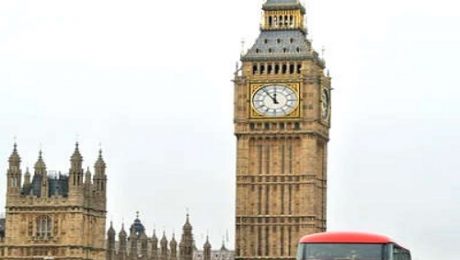 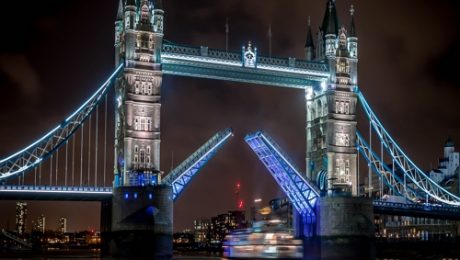 Designed by the city architects horace jones and and john wolfe barry and completed in 1894 the tower bridge is 265 meters long and took 11,000 tons of steel to build its framework.  The tower bridge is the only bridge over the thames river that can be raised as it is a combined bascule ( drawbridge ) and suspension bridge which opens in the middle to allow river traffic to pass through.  It takes 61 seconds to open this bridge to the maximum angle of 86 degrees and it opens about 1000 times a year . Today the bascules are still operated by hydraulic power but since 1976 they were driven by oil and electricity rather than steam . The original pumping engines , accumulators , where the energy to open the bridge is stored and boilers are exhibits of tower bridges permanent exhibition . 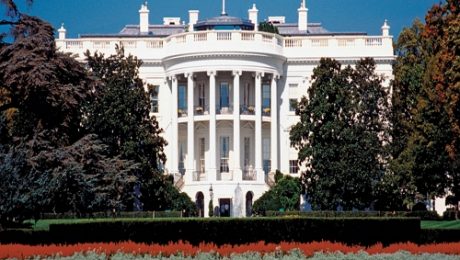 The home of every u.s.president except george washington , the white house recognized as the symbol of american democracy is the oldest federal building in the nation’s capital and has been remodeled and restored many times over the years . It was designed by the Irish american architect james hoban over a site selected in 1791 . President john adams first moved into the unfinished house in 1800 after eight years of construction in 1792 . Known earlier by various names president theodore roosevelt officially gave the white house its current name in 1901 . From the ground floor corridor rooms transformed from their early use as service areas to the state floor rooms the white house is both the home of the president of united states and his family and a museum of american history . Spread over 55,000 sq feet there are 132 rooms 35 bathrooms and 6 levels of residence . The most famous room is the oval office where the president conducts business and meets with his advisors. 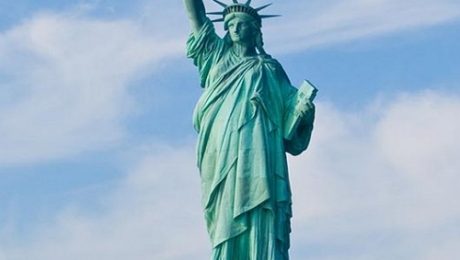 The statue of liberty enlightening the world was a gift from france to united states to commemorate the lasting friendship between the people of the two nations and is recognized as a universal symbol of freedom and democracy.  The french sculptor, frederic auguste bartholdi created the statue itself out of sheets of hammered copper while alexandre gustave effiel designed the statue steel framework. Erected on liberty island a small island in upper new york bay and dedicated of independence in 1876 it is one of the most recognizable landmarks in the world.  The statue designated a unesco world heritage site in 1984 is a woman holding a torch in her raised right hand and a tablet in her left.  The total height from the base of pedestal foundation to the tip of torch is 305 feet 6 inches and it’s weight is 225 tons . There are seven rays on the crown representing the seven continents each 9 feet in length and weighing 150 pounds . A tablet held in her left hand measures 23 ” 7 ” tall and 13 ‘ 7 ” wide inscribed with the date JULY IV MDCCLXXVI ( July 4 1776 ) the date of declaration of independence.  This monument was designated a unesco world heritage site in 1984