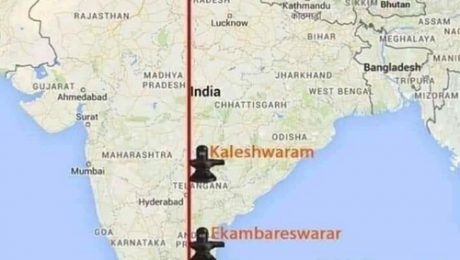 Very interesting – Can you guess what is common between all these prominent temples.

Very interesting – Can you guess what is common between all these prominent temples.

If your answer is they all are Shiva temples, you are only partially correct.It is actually the longitude in which these temples are located.
They all are located in 79° longitudes. What is surprising and awesome is that how the architects of these temples many hundreds of kilometres apart came up with these precise locations without GPS or any such gizmo like that.

See the picture — all are in a straight line.

You will be surprised to know that there are Shiva temples in India which are built in a straight line from Kedarnath to Rameswaram. Wonder what science and technology we had with our ancestors, which we could not understand till today? The Kedarnath of Uttarakhand, the Kaleshwaram of Telangana, Kalahasti of Andhra Pradesh, Akhaseshwar of Tamil Nadu, Chidambaram and finally the Rameswaram temples have been built in the geographical straight line of or nearer to that of 79 ° E 41 ‘ 54 “Longitude.
All these temples represent the expression of gender in the 5 elements of nature, which we call the punch Tatwa (FIVE Elements) in common language. Punch tatwa i.e. Earth, water, fire, air and space. These has released these five Shiva LINGAS on the basis of five elements.

The speciality is also found in these temples in a geographical manner. These five temples were built according to yoga Science, and have been placed in a certain geographical alignment with each other. There will certainly be science that will affect the human body.
These temples were constructed about four thousand years ago when there was no satellite technology available to measure the latitude and longitude of those places. So how was the five temples so accurately established? God Only Knows.There is a distance of 2383 km between Kedarnath and Rameswaram. But all these temples fall in almost the same parallel line. After all, thousands of years ago, the technology of which these temples have been built in a parallel line is a mystery to this day. The Shimmer lamp in the Srikalahasti temple shows that it Represent AIR Linga. The water spring in the inner plateau of the Thiruvanikka temple shows that Represent WATER-Linga. The huge lamp on the Annamalai hill shows that Represent FIRE-Linga. The Sawanbhu Linga of the sands of Kanchipuram shows that Represent the EARTH Linga and the incorporeal (NIRAKAR) state of Chidambaram is Representing as the incorporeal, heavens(AKASH) Eather element of God.What is more surprising now is that the five Lingas, representing the five elements of the universe, have been installed centuries ago in a similar line. We should be proud of our ancestors ‘ knowledge and Intelligence that they had a science and technology that did not even distinguish modern science. It is believed that it is not only the five temples but also the many temples in this line which lie in the straight line from Kedarnath to Rameswaram. This line is also called the “SHIVA SHAKTI AKSH Rekha”. It is likely to be made by keeping the entire temple of Kailash in the regions which falls in 81.3119 ° E!? The answer only God Knows.. …Amazing thing. Mahakal What is the relationship between the Shiva Jyotirlingams……?? The distance of the remaining Jyotirlingams from Ujjain is also interesting-

There was nothing in Hinduism without any reason .Ujjain is considered to be the centre of the Earth. As a centre for thousands of years in Sanatan Dharma, a man-made instrument for calculating the sun and astrology in Ujjain has also been created about 2050 years ago.And when the imaginary line on Earth Imaginary was created by the British scientist about 100 years ago, the central part of it was Ujjain. Even today, scientists come to Ujjain to know about the sun and space.